Given the recent flexing shown by certain groups with big, aspiration-laden names, I thought it is time to organize the power of the many Michaels of the world. Please visit OneMillionMichaels.com, where we will harness the power and righteousness of causes and movements of fleeting, shiny, pop culture and political trivialities that catch my attention. […]

It’s packaged and presented as a friendly pile of … what, exactly? At the risk of standing on the precipice of “get offa my lawn,” I just don’t get it.

“Donald, I’m going to try one more time. This ban on Muslims is not just a terrible idea, you did a terrible job implementing it.” 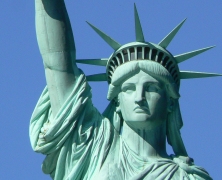 Michael S. Miller: “Disagreeing With The Facts: Media For Dummies”

Facebook does not suck; it is sucked, feeding jaundiced milk to an infantile public yearning for validation over investigation.

Sounds: “It Could Never Be Her”