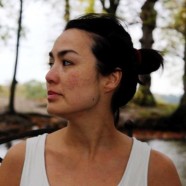 Posted by Michael S. Miller on January 23, 2017 in Music and Sounds, Music Review | Leave a comment

When it comes to amazing music and masterful poetic ambience, Jasmine Rodgers is no stranger, or amateur. The daughter of Japanese poet Machiko Shimizu and Paul Rodgers (Bad Company, Free, The Firm), she grew up surrounded by it.

It is no surprise she would follow in her parents’ footsteps. In 1993, she became the defining voice of the alt/indie rock band Bôa, playing alongside her brother, Steve Rodgers. Signing with Pioneer LDC in 2001, the band found success with its second album, “Twilight.” The album was fueled by the single “Duvet,” which was featured as the opening title song for the popular Japanese anime series, “Serial Experiments Lain.” This helped the band gain a loyal and dedicated following throughout the world.

After the success of “Twilight,” the band changed direction in 2005, following up with a new sound and new label the members created for the album “Get There.” The album featured a softer sound with a more distinctive feel that was beautifully produced.

The group has disbanded, each member pursuing their individual interest. Jasmine Rodgers chose to continue in music, and in 2010 released her self-titled debut, which featured such tracks as “Night Song” and “My Only Friend.” The album was a departure from the singer/songwriter’s past work with Bôa, introducing a more refined contemporary folk-rock sound with hauntingly beautiful vocals and meticulously crafted instrumentals.

With the release of her second solo project, “Blood Red Sun,” she continues to extend her boundaries with a variation of styles and flavors throughout an 11-track musical journey that keeps the first-time listener engaged and begging for more.

The album was superbly produced by Sean Genockey and includes a list of talented collaborators such as Hotei Tomoyasu, Scott Matthews, Dan Carey, as well as members of Red Racer and Pyramid Ship, which add to an amazing experience.

For more information on Jasmine Rodgers and her music, visit her web site.